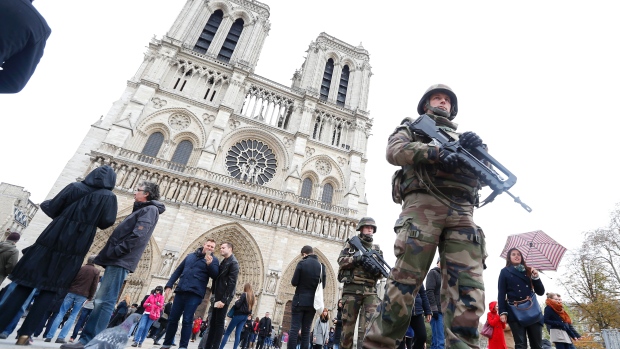 It is not Paris we should pray for; it is the world.
It is a world in which Beirut, reeling from bombings
two days before Paris, is not covered in the press.
A world in which a bomb goes off at a funeral in Baghdad
and not one person’s status update says “Baghdad,”
because not one white person died in that fire.
Pray for the world that blames
a refugee crisis for a terrorist attack;
for a world that does not pause to differentiate
between the attacker and the person
running from the very same thing you are.
Pray for a world
where people walking across countries for months,
their only belongings upon their backs,
are told they have no place to go.
Say a prayer for Paris by all means,
but pray more,
for the world that does not have a prayer,
for those who no longer have a home to defend.
For a world that is falling apart in all corners,
and not simply in the towers and cafes we find so familiar.
(by Karunaezara on Instagram)

The above words, cross-posted on a Facebook Page, reveal a reality much uglier and disconcerting than the loss of hundreds of lives in the Paris attacks. I felt convicted by these words, because my heart recognized them as true. I love Paris, I have personal memories in Paris, I lived in France several decades ago. And so yes, yesterday’s attacks shook me to the core because of these personal connections.

But Beirut and Baghdad are unknown places to me. And because they are unknown places, the people are unknown and do not inhabit my heart. While the loss of lives there through terrorist attacks is equally tragic, that news registered only in my head and not my heart. The same is true for other parts of the world most of which I have never set foot in. I confess the sin of callousness and uncaring.

Yet, my love for Jesus challenges me to desire a greater capacity to hold the pain of the world in my very bones. If I claim to pattern my life on the one who bore our sins (1 Pt. 2:24), then I need to learn to break free from my little self-centered box of a world and embrace the wider human family. But it’s hard, it’s so very hard, to constantly be open, wide open, to pain, to screams of despair, to roaring tsunamis of destruction and death. Not only to remain open to embrace such agony, but to embrace without collapsing under its weight and death-dealing blows. The spirit is so willing, but the flesh is so incredibly weak. I fail miserably every day to kiss the leper, to love the outcast, to forgive the offender.

Yet we are called to be the change we want to see in the world. And God does not give up on us as easily as we may. God knows the potential for good with which we are created. The spark of God in our DNA draws us to compassion and courage, to selfless giving and caring, to great loving and deep forgiving. Those are the things that make our humanity shine with a light that no darkness can overcome. It’s been done some 2,000+ years ago by an obscure carpenter in Nazareth.

That obscure, crazy carpenter from Nazareth dared to refuse to project and pass on the violence and pain inflicted on him. For the first time, someone —none other than God’s own Son—said: the buck stops here. No return punch. No more tit for tat, no more sacrifice, no more scape-goating. “What I want is mercy, not sacrifice,” says God in Hebrews.

Far from rolling over and playing dead, Jesus’ self-sacrifice extended far beyond fight or flight, far beyond the suicide bomber theology of a holy war. In the utterly non-violent, no-return-punch-walk to his own death, in this non-violent response, Jesus released a power far greater than the kind we humans normally employ. That’s what gives Jesus the crown of glory.

It takes great power to say with your life, “I will carry your pain and insults.” And to say these words from an inner place of strength and goodness, not from a place of victimization and inadequacy. Try to do this in the aftermath of Paris, or the Middle East, or Afghanistan, or our own back alleys and homes where abuse and violence create a living hell.

To be sure, carrying pain and insults willingly has nothing to do with being a doormat and simply taking it! Carrying pain from a position of strength is only possible when we are secure in knowing who and whose we are – God’s beloved son/daughter, in whom God is well pleased.

Of course evil needs to be opposed – no question. But we need to be much more creative in our plan of attack. In Jesus God found the only way that effectively neutralizes the power of evil in the world by saying: “I’m willing to suffer. I will bear the problem myself.” That was a brand-new answer, a revolutionary answer. This type of answer no longer contributed to the problem.

That carpenter showed how to grow to our fullest, deepest and most beautiful human stature, another way to say that he opened the door to heaven for us all. If all who profess his name take this seriously and put his example into action, we’d have a massive upheaval against terrorism, beginning with redistribution of riches and restoring dignity and right relations among all peoples.

Look not on our sins but on the faith of your people, O God. Take away everything that sucks courage dry, break down every wall in callous hearts, remove prejudice–resentments–false stereotypes from rash judgments. Teach us your strong and open and generous loving, for the sake of the planet’s well-being and the future of our children’s children.

Update two days later:
I continue to feel helpless, fighting off despair in my own heart, despair for a world on the brink of utter destruction. All the above words seem trite, irrelevant in the face of global destabilization. The only consolation I find is in praying; I am immensely grateful to my friend Amanda who posted this link on her Facebook Page: A Prayer for Paris, Beirut and Baghdad. O God, save us from ourselves.

This site uses Akismet to reduce spam. Learn how your comment data is processed.