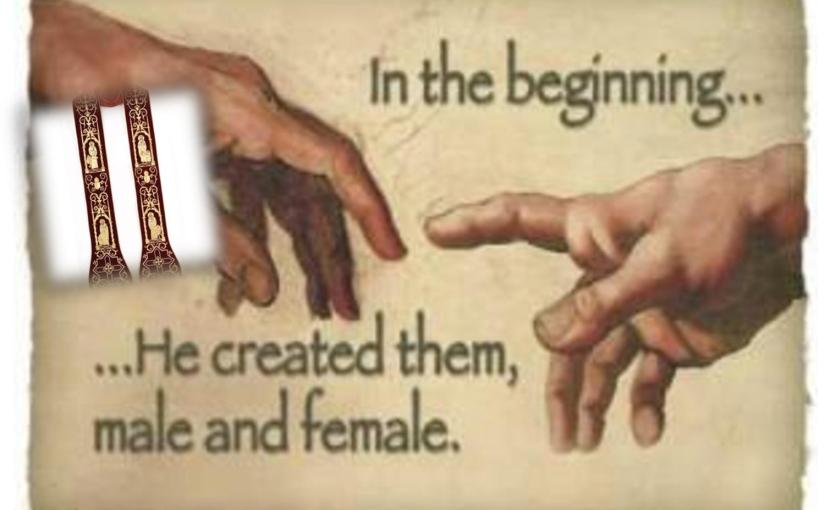 Back in September 2015, I was one of three Canadian women presenting at the International Women’s Ordination Conference in Philadelphia on the question:
Theology of the Body – Friend or Foe of the Ordination Question?

Ever since I explored Pope John Paul II’s Theology of the Body (TOB), I have become convinced that this profound theological reflection provides the most solid argument in favour of ordaining women to the priesthood. In fact, it strikes me as quite peculiar that most supporters of TOB seem to oppose the priestly ordination of women and most supporters of priestly ordination of women seem to have written off TOB as having anything positive to contribute to this discussion.

I beg to differ quite seriously with both positions. I am hereby sharing the text of this presentation in four installments, beginning with Part I of four:

You, O Lord Jesus Christ, may dwell in me
as the new creation bestowed in baptism.
You are the pattern for my life, my fullness
– clothing me “in Christ.”
I may act in your name, O Jesus,
in my loving, comforting, peacemaking.
I may care in your name, I may teach in your name.
I may guide and console in your holy name.
I may enter the Eucharistic mystery as co-creator,
transforming divine spirit
into a new body and blood in my womb
and give birth to God’s beloved children.
I may preach anywhere but in sacred liturgy.
I may “be you” everywhere but at the altar.
I may act “in persona Christi” with the poor and hungry,
with the sick and the lonely,
the troubled and the stranger
—everywhere and always
except in the source and summit
of our faith, the Eucharist …

One of the most challenging things for the human mind is to suspend knowing what we know in order to learn and see something new. This may be the case today as we try to examine in a most cursory manner Pope John Paul II’s Theology of the Body (TOB) in connection with the question of priestly ordination for women in the Roman Catholic Church. Our guess is that if you do know something about TOB, it likely comes from Christopher West’s interpretation of the TOB. Popular and widely endorsed by Catholic Bishops everywhere, West has focused his entire TOB interpretation on sexuality and marriage. But whether we are married or single, we are our bodies long before, and even without, expressing our sexuality in an intimate sanctioned genital relationship.

Either the Theology of the Body has something to offer for EVERY body at any age and in any of life’s seasons, or it is an inadequate theology. So let’s take a brief “hermeneutical” trip, and see whether there is anything in JP II’s thinking that can serve as a new foothold in favour of ordaining women to the priesthood.

We’re using TOB as a springboard for further reflection on the ordination question for women.  Keep in mind, however, that Pope John Paul II never intended to provide direct arguments favouring the ordination of women; after all, he’s the one that closed the door on even discussing the matter. But that should not stop us from looking at the TOB and see if it can nevertheless offer a theological and anthropological foothold for ordaining women. If it does, it would clearly be a case of unintended consequences, exactly the type of thing the Holy Spirit loves to use:).

Our bodies are essential to our humanity, to everything we do, from cradle to grave. Indeed, we experience all of life, and all of our relationships, in and through our bodies. The skin is the largest sensory organ, and healthy loving touch is fundamental to healthy development and growth. When we pray, we pay attention to our posture. When we engage in conversation, our bodies speak volumes about our intent, motivation and purpose. The most exhilarating moments of giving ourselves to others are visceral experiences, deeply involving our bodily movements, sensations and expressions, and at times deeply involving spiritual dimensions.

God fashioned the human body as the foundation of our identity. A human body was necessary and enough for Jesus of Nazareth. This very Jesus who is the animating energy of our faith and the reason for our church, whose bodily gift of self in the Eucharist is the source and summit of our faith, took on human flesh in the womb of a woman’s  . . . body. Yet, throughout most of Christian history, we have ignored the radical implications of this truth when it comes to the Incarnation of God in Christ and our bodily comfort level.

Here is the TOB quote most relevant to our exploration: Although in its normal constitution, the human body carries within itself the signs of sex and is by its nature male or female, the fact that man is a body belongs more deeply to the structure of the personal subject than the fact that in his somatic constitution he is also male or female… which are, as it were, two different incarnations, that is, two ways in which the same human being, created in the image of God (Gen 1:27), is a body. (TOB, par. 8.1)

When the first person in Genesis exclaims, This, at last, is bone of my bones and flesh of my flesh, Pope John Paul suggests there is a unity deeper than gendered difference. The presence of “the other” gives rise to a greater self-consciousness and the meaning of personhood, visibly expressed in the body. Creation in the image of God, therefore, is not limited to the individual person but is also an image of the Trinity as a communion of persons. Formatively, this means that each one of us, female and male, is an image of and a participant in the very life of God. At an anthropological level, original unity is an embodied recognition and reception of another person as a gift offered in creation by God to co-create.

However, despite this amazing good news, Christian history has had an ironically opposite track record. At varying times we have degraded the body, chastised the body, dismissed the body, even blamed it as the source of all evil, in particular the female body. In light of the Incarnation, and despite St. Paul’s summons, “Do you not know that your bodies are temples of the Holy Spirit, who is in you, whom you have received from God?” (I Cor 3:16 & 6:19), such a track record should be considered deeply heretical. Given this dubious legacy, it is refreshing to re-read Katrina Zeno’s presentation at a TOB conference in Rome a few years back in which she said:

As human persons we do indeed have a very specific nature, an embodied rational nature, which perhaps could even be called a sacramental nature. At all times and in all places our embodied human nature is created by God to point to something beyond just the material. We are not relative only to ourselves and to our acquired goods and pleasures. On the contrary, “the body, in fact, and only the body, is capable of making visible what is invisible: the spiritual and the divine” to cite one of the most frequently quoted passages from the theology of the body (Audience 19, section 4). Our bodies are created by God to be living sacraments, to make God physically present in the world through our words and deeds (Zenit, Nov. 14, 2011).

This site uses Akismet to reduce spam. Learn how your comment data is processed.