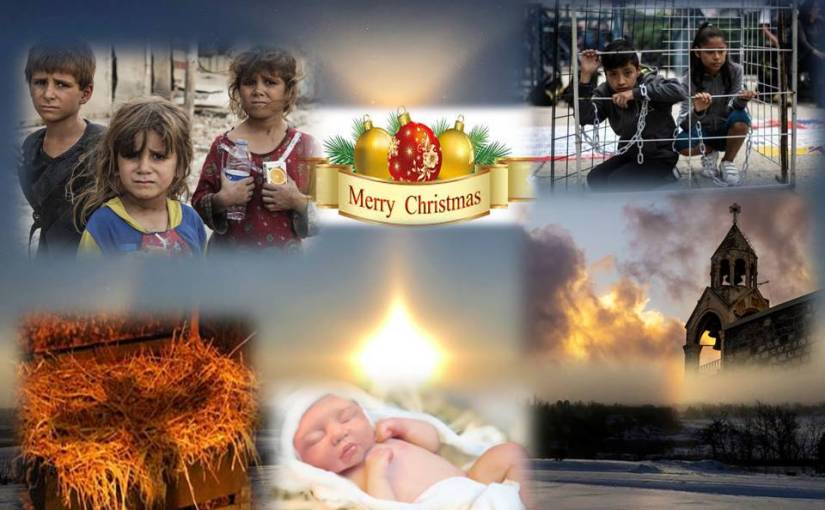 “On the evidence of our senses, despair is perfectly rational.  Entropy is built into nature.  Decay is knit into our flesh. By all appearances, the universe is cold, empty and indifferent…This leaves every human being with a choice between despair and longing.  Both are reasonable responses to a great mystery.” ~ Michael Gerson, Washington Post, December 5, 2019

This is not the Christmas reflection I planned to write. But faking joy is not in my tickle trunk. I might be heading into a full-blown crisis of faith. Being a priest, that’s a very risky thing to confess, especially in this jolly season. But even us professional believers don’t have a corner on trusting God in all things. Christmas cards have been arriving in the mail (yes, snail mail cards are still popular) with lofty lines such as “For Unto Us a Child is Born” and “Peace on Earth” and “Joy to the World” and “God Became one of Us.” These sweet words fall on deaf ears in an ever darkening world, and not just because of the natural darkness in the northern hemisphere at this time. Against the backdrop of the world’s evil forces small and big, the well-intentioned greetings sound hollow, making a mockery of the meaning of the season.

The daily news cycle of doom and gloom for way too many good people is chipping away at my dreams and hope and desire to keep working for a world where it is easier for more people to simply be good and healthy and happy. The other day my morning prayer featured the account of the angel Gabriel announcing to Mary she would give birth to Jesus. In the story the angel says: “Nothing is impossible for God” (Lk. 1:37). I usually love this story. But this time my cynical thoughts twirled into: if nothing is indeed impossible for God, then how come God doesn’t relieve the suffering of the undeserving multitudes? Then I read the Psalm which says, “The Lord hears the cry of the poor, blessed is the Lord” (Ps. 34). Really, do you, Lord? You’ve got to be kidding me. “The Lord answers those who call upon him” (Ps. 145) Oh, tell that to the millions of displaced people running for their lives. Tell that to the multitudes who scream to the heavens for mercy and deliverance because their suffering is beyond endurable and certainly far from noble. “The heavens are telling the glory of God” (Ps. 19). Well, they won’t be much longer if we do not curb the accelerating climate change crisis. And on and on it went.

Every holy word, every Christmas greeting card, every spiritual thought brought an onslaught of doubt and skepticism, of despair and disbelief. My spirit spiraled into an abyss, making me wonder if it’s time to leave the planet (metaphorically, not suicidally). The world I thought to help build does not seem to have materialized; time to check out. As far as I can see, God has abandoned us to our own devices, and it shows. Or have we abandoned God? Maybe we deserve to feel the consequences of our own reckless behaviour.

How did we manage to create such a global monster? The kind which pits people one against the other, the kind which allows climate change to drown island nations and burn up land with fierce wildfires and soaring heat, the kind which allows greed and lust for power to increase the mass migration of refugees and displaced peoples, drowning either in the Mediterranean or on land in misery? And the young seem to spend more time on cell phones and social media than with grandparents and extended family (many of whom are living in their own unhealed brokenness). The young, those fresh shoots of life full of passion and zeal, of dreams and visions, are meant to carry the torch and embody the hope of the old. Instead, they seem to be drowning in an unprecedented epidemic of depression and eco-anxiety, with a good measure of identity confusion and growth-stunting life-choices thrown in. Having lifted the anchor from the wisdom of ancient traditions, the young seem lost on an ocean of unlimited possibilities.

I am the Lord your God, who teaches you for your own good, and who leads you into fullness of life (Is. 48). Now I could imitate some of my friends who have made a conscious decision to fast from the daily news. But that comes with other risks, most notably one of creating an increasingly tiny island of what matters, eventually fostering tunnel vision and uncaring. But I do understand why some opt to keep their world small, shutting the ears and eyes of their hearts to the pain and agony of others. In this age of social media and global communication, the flood of information simply gets too much, overwhelming our little brains with impossible processing demands. The same goes for opening our hearts unreservedly to the pain of the world; we risk feeling flooded and might drown in the agony of suffering, humanity’s and all of creation’s.

All the believers were one in heart and mind. No one claimed that any of their possessions was their own, but they shared everything they had. (Acts 4) Over two thousand Christmases later, has Christ’s coming made a difference? Over two thousand Christmases later, has the Word truly and fully become flesh in us, those who profess him as Lord and pattern for living? I want to believe it has, but the evidence often points to the contrary. Endless in-house quarreling still leads to ecclesial break-ups and new alliances, continuing to fracture the Body of Christ. Denominational identity markers still get hauled out to keep us apart from “them.” All the while we shamefully ignore Christ’s own burning prayer on the night before his death, namely that we be one as he is one with the Father. Our sins of betrayal, abuse and cover-up have sent Christianity to the gallows. In the affluent west we have sold our souls to the capitalist system of consumption, trampling down countless of God’s cherished little ones in the process. And the Holy Book is pretty clear about what God thinks of those who cause little ones to stumble (Mt 18:6) and who refuse to welcome the stranger and care for the orphan and widow (Jer. 22:3, Mt. 25:35–36).

I could allow the barrage of bad news to feed cynicism, anger and callousness. But then I may well become impossible to live with. I could adopt an attitude of the “glass half-full,” finding the bright stories of love and mercy and hope. And yes, they do exist, this one in particular. But, and there’s always this annoying but, to do this might lead to ignoring the pain and the cries for help. What has God decided to do — to enter deep into human misery through Jesus, and to redeem that misery from the inside out so it loses its death-dealing power. Or, as my dear friend Leah says so well in her Christmas reflection this year, God risked dropping anchor in a world that could hurt his Son. What a risk, much greater than any listed above… I’m hanging on to this holy child’s tiny finger for dear life. Not because I get paid to do this, but because my hope for the world is still stubbornly staked on this holy birth.

The Risk of Birth – Madeleine L’Engle

This is no time for a child to be born,
With the earth betrayed by war and hate
And a comet slashing the sky to warn
That time runs out and the sun burns late.

That was no time for a child to be born,
In a land in the crushing grip of Rome;
Honour and truth were trampled by scorn-
Yet here did the Saviour make his home.

When is the time for love to be born?
The inn is full on the planet earth,
And by a comet the sky is torn—
Yet Love still takes the risk of birth …

The Coming of God — Ann Weems

Our God is the One
who comes to us
in a burning bush,
in an angel’s song,
in a newborn child.

Our God is the One
who cannot be found
locked in the church,
not even in the sanctuary.

Our God lives where our God lives,
and destruction has no power
and even death cannot stop
the living.

When God is ready
God will come
even to a godforsaken place
like a stable in Bethlehem.

Watch … for you know not
when God comes.
Watch, that you might be found
whenever
wherever