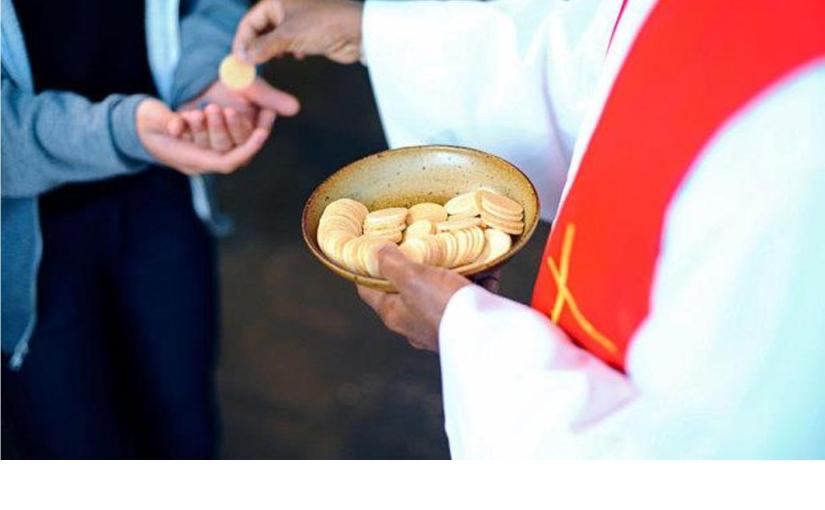 I see them Sunday after Sunday: women, men and children approaching the table of the Lord to eat the bread from heaven and drink the cup of salvation, the weekly parade of virtues and weaknesses, of gifts and sins (characters and descriptions are fictitious):

And on and on and on … a motley parade of humanity. Human flaws everywhere, failure and sins galore shuffle to the front, famished for divine grace in food and drink. God’s holy meal — primary sacrament of reconciliation.

Each son and daughter of God, forgiven by Jesus in the Eucharist – Lord, have mercy.
None of us come to Christ’s table with a perfectly clean slate; but, praise God, Jesus himself wipes the slate clean. – Christ, have mercy.

Jesus had no trouble with sinners; it was the hypocrites he couldn’t stomach. – Lord, have mercy.

Jesus turned no one away … no one: “Take and eat, Take and drink, this is my body, my blood, given for you and for the forgiveness of sins. Do this in memory of me.” God’s own holy table with food from heaven for sinners …

In the face of daily sinful behaviour in baptized and unbaptized alike, it is a miracle that God desires us at all. God has claimed us in baptism for himself in Jesus. Baptism is the door to the sacrament of Holy Communion. In baptism God makes us worthy and righteous. In Holy Communion we receive divine medicine to heal, restore, reconcile us into right relation.

The Eucharist, although the fullness of sacramental life, is not a prize for the perfect but a powerful medicine and nourishment for the weak.  These convictions have pastoral consequences that we are called to consider with prudence and boldness. Frequently, we act as arbiters of grace rather than its facilitators. But the Church is not a tollhouse; it is the house of the Father, where there is a place for everyone, with all their problems. (Pope Francis, Joy of the Gospel, par. 47)

Can we say yes to all of the above? I certainly can, especially now as part of the Anglican family of Christian disciples. As a Roman Catholic I was needled by persistent, uncomfortable questions. I would see a discrepancy between Catholic Eucharistic teaching as articulated so eloquently above by Pope Francis on the one hand and Roman Catholic regulations of practice at the communion table on the other. With humility and sincerity of heart, I would ask … why does the “sin” of ecclesial divisions, along with the “sin” of divorced and civilly remarried, seem to fall into a category altogether different than any of the horrendous things each of us can secretly bring to the Holy Table every Sunday? Christ’s blood courses through everyone’s firmament and was shed so that ALL sin may be forgiven every time we remember how he loves us even to this day.

Is it because certain sins are more “public” than others? Is it because we know who is and who isn’t “in the fold” even though the Roman fold is nowhere near the entire fold? How can the Eucharist release its healing and unifying power if it is withheld in precisely those situations and for those persons most in need of that healing and unifying power? Why do certain sins, such as the ones of ecclesial divisions and civilly remarried Catholics, get singled out? I mean let’s be honest, an X-ray of hearts in the weekly communion procession would easily reveal how unprepared, how unworthy, and how inadequate we all are to receive the heavenly food.

But most of us don’t tell. So we approach the holy table in great spiritual need and without anyone deeming us unqualified to receive the heavenly medicine of soul. Why penalize those who follow Christ in another room of his mansion, or who find happiness in a second marriage, while possibly much greater sins come to the table unnoticed?

Setting criteria and boundaries on reception of Eucharist is very risky. We can easily become gatekeepers instead of servants. We can all too easily set ourselves as judge over one another, as arbiters of grace instead of its facilitators. Does “policing” the table of the Lord not mock the unity Christ won with his own sweat and blood? Does barring God’s table not reveal a lack of trust in the reconciling power of the Eucharistic offering of Christ? Ecclesial divisions and marriage break-ups are a result of sin, not the outcome of God’s intent. Every time we use divisions to keep us from sharing God’s holy meal – the medicine for our souls – we become complicit in the very sin that caused these divisions in the first place. Human divisions of any sort cannot be resolved in human ways. That is precisely why Jesus came; Christ won the victory over human divisions, ecclesial and otherwise.

Jesus poured out his life so as to overcome all division and strife. How did we get from Jesus who scandalously ate with sinners and rif-raf to a fenced-in holy table? Is it not a violation of the highest order to the integrity of Christ’s Eucharistic sacrifice on the cross to use his holy banquet as a human ledger? Where do we find the audacity to evaluate who’s in and who’s out at the Table whose servant we are, not whose host? How is it that the sins of ecclesial divisions or of civilly remarried Catholics are treated differently than the general daily human sinful condition? And even if it is Christ’s will that we monitor the state of grace of the guests at his table, whose criteria do we apply? And who gets to decide and how if conditions are finally ready to share the Table of Mercy?

Every Sunday I, a sinner, share the Bread of Heaven and the cup of Christ’s blood with sinful, fallible, weak, flawed, devious, dishonest men, women and children. In solidarity we come forward, in repentance we seek God’s mercy through partaking in God’s sacred meal. As we eat and drink, Jesus feeds our souls, heals our spirits, and reconciles us to the Father.

I’m on the Canterbury trail now, having become part of a church family where all baptized sinners are welcome at the Holy Table of its host, Jesus Christ himself. Technically speaking my Anglican move bars me from the Roman Catholic Eucharist, even though my faith in and my hunger for the holy sacrament has not changed one bit.  I’m grateful to live in an RC diocese where a local Diocesan Policy is in effect on sacramental sharing with baptized Christians from other denominations, a policy especially generous towards inter-church families (my husband remains RC). No doubt there are glaring shortcomings in the Anglican tradition, but when it comes to the Eucharist the Anglican church family takes Pope Francis’ words literally and puts them into practice:

The Eucharist, although the fullness of sacramental life, is not a prize for the perfect but a powerful medicine and nourishment for the weak.  These convictions have pastoral consequences that we are called to consider with prudence and boldness. Frequently, we act as arbiters of grace rather than its facilitators. But the Church is not a tollhouse; it is the house of the Father, where there is a place for everyone, with all their problems. (Pope Francis, Joy of the Gospel, par. 47)