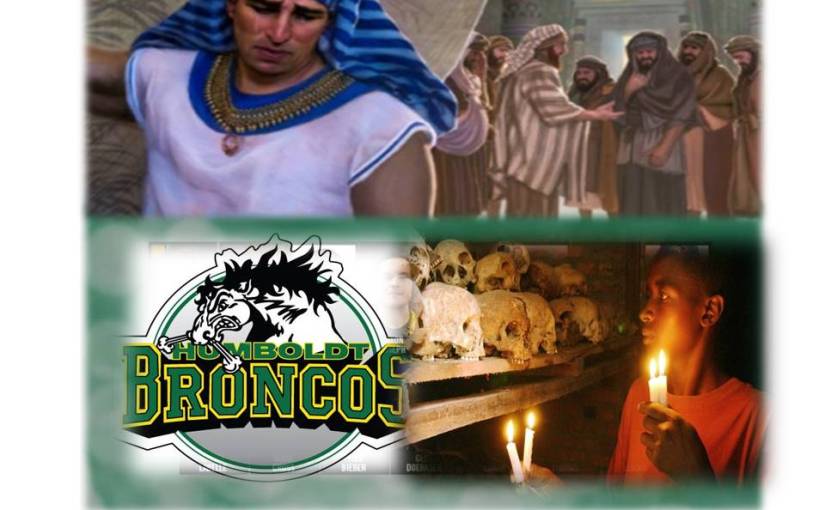 Magnanimity – what does this word mean? Noble, generous, great-heartedness, benevolence, extravagant kindness. These words came to mind when pondering today’s Scriptures from Genesis (45:1-11) and Luke (6:27-31). All I really need to say is that Joseph’s attitude, words and actions towards his brothers express vividly what Jesus says in today’s Gospel. What is that connection between Joseph’s actions and Jesus’ words? In order to see and appreciate that connection, let’s recall Joseph’s story, the context in which the encounter we hear about today takes place.

Avarice and greed, jealously and sibling rivalry, sex and politics, and ample conspiracy in the royal palace – all these juicy ingredients make up the story of Joseph and his brothers. By the time the story gets to chapter 45, Joseph has become the virtual ruler of Egypt. He has survived the murderous plot of his brothers to sell him as a slave when he was younger. He came to the attention of Pharaoh and was brought into the royal palace. He wins Pharaoh’s favour and rises in the ranks, again causing jealousy and scorn. Joseph resisted seduction by the wife of a powerful Egyptian, and is now in control of the country’s storehouses of supplies. And famine has hit hard, both in Egypt and in Palestine. In an ironic twist, Joseph’s brothers now stand before him begging for food for their families, begging for their lives. The brothers have no idea that it is Joseph, the brother whom they sold into slavery, that now holds their lives in the balance. Moreover, Joseph has caught them accused of theft. Given the brutal betrayal Joseph suffered at the hands of his brothers, he has every right to take revenge now.

It was as difficult for the ancient people as for us to believe that God is at work in the dark and destructive moments of our existence. Too often it seems nigh impossible to taste grace and redemption in the dark. Then it’s only a small step to conclude that God is never present in human suffering and loss. And let’s be honest: what Jesus proposes might sound lovely, but deep down we “know” that it’s so darn naive and impossible. Even many committed Christians quietly think that notions such as turning the other cheek, going the extra mile, resist retaliation and revenge, are completely unrealistic in our violent world, dangerous even. The violent often crush those who do not retaliate. And yet, meeting violence with violence increases violence.

But then there’s Joseph. Before anything else, Joseph exemplifies
what it means to be God’s servant. In this moment of reckoning with his brothers, when their destiny is in Joseph’s hands – literally – Joseph stands as a powerful witness to what God’s grace can do in our lives. If we are left wondering what it means to follow Jesus’ upside-down commands to love our enemy, to forgive our persecutor, to give without recompense, to refrain from judging, look at, and listen to, Joseph. Realize what he’s been through, and really feel what is happening in this dramatic scene

How easy it is to regard Jesus’ words as impossible burdens or as pie-in-the-sky utopias rather than as our most powerful ally in the war of all wars: the war on the need for war and revenge. We might be less dismissive of Jesus’ commands if we realize that our survival as a people has not been due to our capacity to win wars, or crush our enemies. Rather, the survival of the human species is directly connected to our capacity to forgive, to show mercy and so to begin anew.

In the nineteenth century Abraham Lincoln reunited North and South “with malice toward none; with charity for all.” He opted for weapons of warmth and generosity over those of repression and vengeance.  In the 1960’s Martin Luther King, Jr. marched facing jeering and taunting, fire hoses and police dogs. He responded to threats of death and destruction with threats of peace and justice for all. In 1990, Nelson Mandela emerged from 27 years in prison for condemning Apartheid. To the surprise of many he called not for revenge, but for forgiveness and reconciliation. Many felt betrayed that he turned away from righteous anger, yet the world took note of such a powerful heart and mind.

This spring it will be 25 years since the Rwandan genocide. Approximately one million people were slaughtered over the course of 100 days for simply being Tutsi. The killers were not some outside group, but rather classmates, co-workers, friends, next door neighbours. In a country as community-based as Rwanda, this is highly significant. Forgiveness becomes way more difficult when you keep encountering the killers regularly at the market, at church, at school, on the street.

Much like Joseph forgiving his brothers, Rwandans were not just forgiving a stranger, but a neighbour, a friend, who had harmed them irreparably. Over the years since that awful tragedy, the people of Rwanda are rising again. Many of the victims acknowledged that the process took time, and it was not easy, but eventually they learned how to resist hatred, revenge and resentment, and instead developed the capacity for mercy. Many perpetrators were moved to regret their heinous crimes and found the courage to ask forgiveness. One Rwandan woman used the compensation money she received for her husband’s death to help feed and support the man who killed him. Another man was shocked when released from prison after 10 years to find his wife living with the widow next door, whose husband he had murdered. The two women had been supporting each other during his time in jail. Thanks to such heroic acts of mercy, Rwanda is rebounding and building a new future of hope for its children’s children.

Only a few weeks ago, here in our own province, we were privy to the heart-breaking victim impact statements of the Broncos families who lost their young loved ones or had their sons’ lives forever scarred by enduring injuries from that terrible crash nearly one year ago. We heard words of forgiveness from many a parent, words laced with unspeakable grief and pain. And yet, these parents are choosing forgiveness as the only road to healing, liberation and restoration for both the countless victims, their loved ones and for the bus driver, a young man who will now live the rest of his life with the death and injury of so many on his conscience.

“To err is human, to forgive is divine.” “Do onto others as you would want them to do to you.” These are not empty slogans. They are the most profound statements of how God’s life reaches into our lives, and makes us his own. The greatest measure of any civilization still boils down to the same thing. The same thing in Joseph’s time, the same thing in Jesus’ time: how well we give, how well we forgive and how we lift up the lowly.

Magnanimity – extravagant generosity, big-heartedness in the face of adversity, evil, sin, and violence … Very soon we will be entering the Lenten season. Every year Lent calls us to reflect, to repent, and to forgive. Every act of repentance and mercy towards one another is spiritual money in God’s bank of redemption and grace.
Forgive, and you will be forgiven; give, and it will be given to you.
A good measure, pressed down, shaken together, running over,
will be put into your lap; for the measure you give
will be the measure you get back.
Be merciful as your Father in heaven is merciful.
Joseph and countless others right up to this day show us in word and deed that this command of our Lord truly does lead to life in abundance and into the freedom of God’s Spirit. AMEN