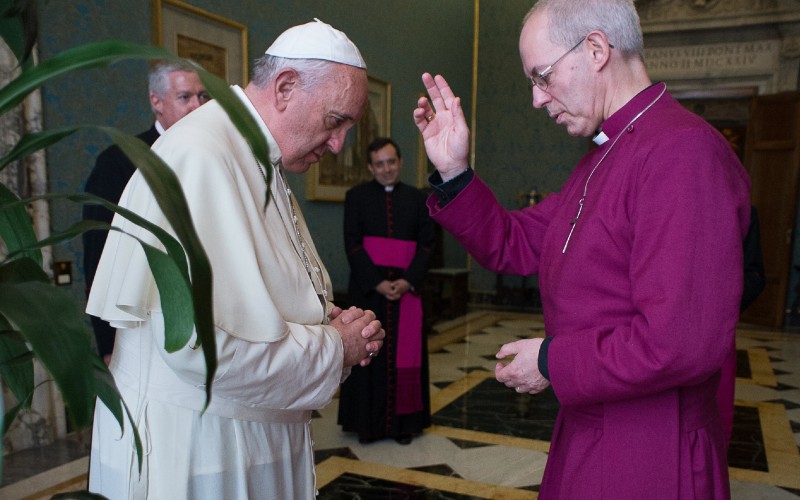 Sometimes the best words come from elsewhere and there’s nothing to improve upon, only to reflect on their significance. So it is this morning. I invite you to join me in pondering the implications and potential for church unity of the following:

In the interview with the Belgian weekly Tertio, released on Wednesday (Dec. 7, 2016), Pope Francis was asked about his attempts to “renew the Church” inspired by the Second Vatican Council. In his reply, the pope distinguished what he called the ‘synodal Church’, which he contrasted with a pyramidal, or top-down, model.

“The Church is born from the communities, the bases, baptism, and is organized around a bishop that convokes it, strengthens it,” he said. “The bishop is the successor of the apostles. This is the Church. But in the world, there are many bishops, many organized churches, and there’s Peter.”

Hence, he continued, there’s either a “pyramidal” Church, where “what Peter says what to do,” or a synodal Church, where “Peter is Peter but he accompanies the Churches and makes them grow.”

The richest experience of the latter, Francis said, were the two synod of bishops on the family, which took place in October 2014 and again in 2015. During them, he continued, all the bishops of the world, representing their dioceses, made their voices heard.

“From there we have ‘Amoris Laetitia,’” the pope said, referring to the apostolic exhortation he released earlier in the year, as the fruit of the synods.

The richness of nuances present there, he added, is part of the Church: “Unity in differences. This is synodality. Not to go down from top to bottom, but to listen to the Churches and harmonize them, discern.”

Everything which is present in this document, Francis continued, was approved in the synod by two thirds of the bishops, and this is a “guarantee.”

I cannot help but recognize in the above words from Pope Francis strong echoes of the Anglican model of being church — a synodal model. Pope Francis acknowledges that the Roman Catholic Church has work to do to recover the spirit of synodality. Is it possible that, now more than ever, Rome seems ready to learn from Canterbury? In turn, with Pope Francis’ efforts to reclaim and recover the synodality of the Church, is it possible that Canterbury could become more amenable to embrace the bishop of Rome as the “guarantor of the unity of the Church”?

I am not claiming that the Anglican governance and authority structure of synodality is in any way superior or flawless. Both models will always fall short of their ideal since our fallen humanity prevents perfection on this side of heaven. I have reflected elsewhere on this blog about this very issue. But both models also need one another to remain healthy.

In any case, whenever we see signs of “rapprochement,” a growing appreciation and understanding between Christian traditions, we need to lift those up in gratitude and hope. And I’d like to think that this morning’s reporting was one of those signs.

Update Dec. 20: An in-depth treatment of the above subject can be found in Richard Gaillardetz’ recent article here.